Journalist Nandu from the Southern Metropolis Daily, one of the top 10 authoritative media in China interviewed Annette Nijs,Founder The China Agenda & President of BSN Netherlands Business School. She was interviewed as a globally renowned economist, who has been actively promoting multi-disciplinary cooperation between China and EU countries and enterprises for many years.

“The 21st century is the century of China”

Editor’s Note: Since the 18th Party Congress, China’s “circle of friends” has been expanding, and its international influence, appeal and shaping power have been significantly enhanced. 2022 is the “Year of China” of BRICS.  The interview is part of a special series “Hand in Hand to the Future – a visit to the international friends, who met face to face with General Secretary Xi Jinping“. Southern Metropolis Daily and N-Video launched this special series to collect stories from foreigners about their interactions with General Secretary Xi Jinping and to share the view of those foreigners on what they witnessed in recent years on the role of China for example as a leading global power in promoting multilateralism, fighting epidemics and promoting economic recovery

This issue features an interview with Annette Nijs, President of Business School Netherlands Global Vice President of the Asia Pacific Presidents’ Association and former Cabinet Minister for Education, Science and Culture of the Netherlands. 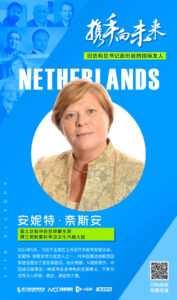 In May 2014, President Xi Jinping held a symposium for foreign experts in Shanghai, where experts such as Dutch-born education and culture expert Annette Nijs delivered a speech in which she offered advice and suggestions on China’s efforts to promote the construction of an innovative country. In this exclusive interview Nijs said that the picture taken from the scene of her accompanying President Xi Jinping on foot to the venue and talking with him made a deep impression on her then and to this day. In 2018, she became the President of BSN, a Dutch Business School, which aims to build a bridge between Chinese, European and African business leaders and management elites.

Nijs told the South China Morning Post that she is confident that the two countries China and the Netherlands will continue to deepen their cooperation in the future. In her view, China has taken a very different path of development from most countries in the West and has successfully explored a development model with its own Chinese characteristics. Today, China is at the forefront of the times, and continues to play an active role in the international arena, bringing new opportunities to the world and its people.

“It’s awesome to thinks in terms of the future of human development.”

Nando: Please tell us what happened at the 2014 Foreign Experts Symposium.

Annette Nijs: Before the symposium began, I accompanied President Xi Jinping on a short walk from the group photo all the way to the venue and was given the opportunity to talk with him briefly. This was a great surprise to me. Furthermore it was an honor for me to deliver a speech to President Xi Jinping. I had prepared carefully for this speech for a long time. The main point I made at the symposium was that China has many scientists, who are at the forefront of the international arena, and that China has a high level of innovation power, but that “innovation” is different from “creation”. For example, it is really easy to produce a car, it may be easy to design a large domestic aircraft but it is much harder to manufacture such a large domestic aircraft on your own in a way that it can fly safely.

For this reason, I suggested that, in addition to focusing on scientists, China should also focus on talent which is capable of manufacturing complex products such as airplanes, and also to focus on advanced manufacturing to build a talent pool which can promote the intelligent upgrading of China’s manufacturing industry.

I was very impressed by President Xi Jinping listening carefully to my speech at the symposium and by his response to my comments and suggestions. During the symposium I got the chance to experience, to feel his strong personality also through his words – Xi has the ability to think not only in terms of the matter itself, but at the same time also in terms of the long-term perspective of the future development of human society. That’s remarkable.

Nandu: What inspiration did this symposium give you?

Annette Nijs: China has taken a very different path of development from many countries in the West and has successfully explored a development model with its own Chinese characteristics. Therefore, I had to put aside much of what I had learned in the past – also during my study of economics – in order to truly understand China. The 21st century is China’s century, and it is crucial to understand the global leader of this era.

I have written a book called ‘The China Factor’ as part of my mission to promote a deeper understanding of China among people around the world by showing readers how China’s growing international stature will affect the world. At the end of the book, I conclude that China maybe different from the West in many ways, but that it has played a positive role in many areas and is a world leader in many ways. We do not need to be afraid of China’s rise.

“China continues to inject positive, stable and constructive forces into the world”

Nandu: Have you ever been to China? What are your impressions of China?

Annette Nijs: I have visited China more than ten times a year for 10 years before COVID. I will never be finished to observe China, and I love to meet my Chinese friends.

In the last two years, I have been interacting with my Chinese friends by attending online conferences. What I noticed sometimes was that some of the Chinese speakers, who talked about the Netherlands, knew more statistics of my country than I did. I became close friends with many Chinese friends. I am touched that they were always there for me, that they are able to give without expecting anything in return. I used to think that I could only make real close friends back home, but in China, I have also gained some real precious friendships.

I believe that it is particularly important to make decisions based on facts against the backdrop of the accelerating evolution of the world’s unprecedented changes in a century, and that China is one of the continuously injecting positive, stable and constructive forces into the world.

Nandu: In 2015, you were awarded the “Friendship Award” by the Chinese government, which is the highest honorary award for foreign experts who have made outstanding contributions to the modernization of China. How did you feel at the moment of receiving the award?

Annette Nijs: Honestly, I was very surprised and happy, I never thought I would deserve this award. At the award ceremony, I met highly talented people from all walks of life, with different backgrounds. They shared their experiences with me, which gave me the opportunity to learn even more about China. I can say that this award brings us – foreigners and China – together and gives us foreigners a better opportunity to be heard. In fact, some of the foreign experts and I have been invited by the Chinese government to make a contribution to the drafting of the Government Work Report. It is a great thing that China is willing to listen to our ideas.

“China brings many new opportunities for the world”

Nandu: What changes have you witnessed in China during this decade?

Annette Nijs: The world is moving forward and the rise of China brings new opportunities. For example, in the field of solar energy, a company from China CHINT has built the largest solar park in my country, and some hospitals in the Netherlands are using data cloud services from Huawei.

In recent years, the Netherlands has been cooperating with China in various fields such as agriculture, trade, culture, new energy, transport and logistics, and this trend is continuing.

“In April this year, the Netherlands and China discussed the promotion of exchanges and cooperation between horticultural enterprises of the two countries at the “Dutch-Chinese Forum on Cooperation in Facility Agriculture and Horticulture” held in the park of the World Horticultural Expo in Almere, the Netherlands.In addition, the cooperation between the two countries in music has received very positive feedback for example, your famous pianist Lang Lang has performed in the Netherlands several times. In my opinion, flowers and music both have the function of expressing common human emotions and help strengthen the friendship between the two countries. In addition, entrepreneurs from both countries are constantly exploring the possibilities of cooperation in their areas of expertise and actively sharing their results with each other. I hope that in the coming years we will see the flowers of cooperation bear fruit, which will encourage us to continue to seek cooperation in more diverse areas”.

By Southern Metropolis Daily, N Video – Hand in hand towards the future – A return visit to the international friends who met face to face with the General Secretary Xi

The interview in Chinese: