Military deterrence in the Indo-Pacific: the Islands Chains One of the most direct effects of the recent rising tensions between East and West – especially after the visit of Pelosi to Taiwan – is the build-up of military force on both sides of the first Island Chain. For the US Defense Department, the Indo-Pacific region remains what it calls its ‘priority theater’. In 2021, the United States Indo-Pacific Command (INDOPACOM) stated that “it focuses resources on vital military capabilities to deter China”. Concerning investments, INDOPACOM requested $4.68 billion extra in 2022, and $22.69 billion extra from 2023 through to 2027, in order to meet its objectives. These objectives are “to persuade potential adversaries that any preemptive military action will be too costly and likely to fail by projecting credible combat power at the time of crisis”.

The INDOPACOM further talks about “the fielding of an Integrated Joint Force with precision-strike networks west of the International Date Line along the First Island Chain, integrated air missile defense in the Second Island Chain, and a distributed force posture that provides the ability to preserve stability, and if needed, dispense and sustain combat operations for extended periods.”

The Island Chain Strategy is an American maritime containment plan conceived during the Korean War. Back in the days it aimed at containing the USSR and North-Korea, but nowadays it focusses more on surrounding China with US naval bases and military presence. Clearly Taiwan is the main hotspot of potential conflict at present.

Especially along the First Island Chain tensions have been building in past years. Many western and South-East Asian countries object against China’s claim on uninhabited reefs and islands in the South China Sea, for example the Spratly Islands. Yet it looks as if China increasingly treats the South China Sea as its own territory.

Military deterrence is back in the Indo-Pacific. The US and China accuse each other of provocation on a regular base. Through military display –American warships in the Strait of Taiwan, or Chinese fighter jets entering Taiwanese air space– they show off their muscles, and behind the scenes they are working on new ways to keep each other in check. 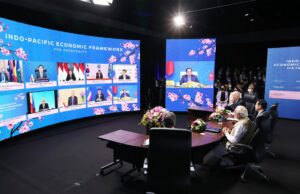 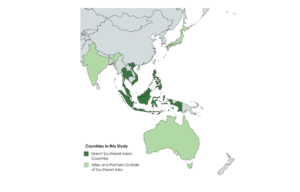